Just call me Lady Grantham because today a dream of mine came true. That’s right, folks, I’m now one step closer to royalty. Today, I went to Downton Abbey.

Please feel free to listen to this as you read my post because I was humming it all day:

Turns out, Downton Abbey isn’t its real name. In real life, it’s called Highclere Castle in a place called Newbury, and the Earl and Countess of Carnarvon live there — all of which I found out about six months ago when I bought my ticket. Finally, the fateful day arrived, and the United Kingdom decided to rain on it. I should have known because it’s been beautiful and sunny for the past week, but there was no going back. So me and my independent self hopped on a train from London to the countryside.

I arrived at the very tiny Newbury station and caught a cab. The driver was a nice lady named Dawn, who told me all about the area as we drove to the castle. I learned that Kate Middleton is from the region, and her parents still live there. Also, Highclere’s earl is related to the guy who discovered King Tut, so the castle also features an Egyptian exhibit, which I did not feel like paying for. Dawn also said that the town in Downton Abbey, known as Downton, isn’t actually in Newbury. It’s some other British town far away called Bampton, which sounds awfully inconvenient. How do the Crawley’s rule over their subjects? Just kidding, this is the 21st century so I’m sure the Internet is somehow involved.

The first thing I really noticed on the drive is that the estate is HUGE. Driving from the entrance of the estate to the actual castle took about five minutes, and she said the entire thing was a thousand acres, or something. Dawn dropped me off right outside the gates, and then she gave me her card in case I needed a ride back.

There was some sort of Easter carnival happening on the lawn right in front, but nothing could make me tear my eyes away from the majesty that is Downton Abbey…I mean, Highclere Castle. It was everything I imagined. 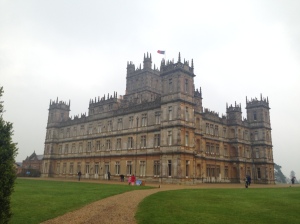 I made my way to the entry, where I saw Branson drive the car so many times. Where the family stood outside to greet their many distinguished guests, including Mr. Pamuk. Where the servants waited to carry in the bags. But anyway…

Once inside I embarked on the self-guided tour, and then I noticed about a hundred “No Photography” signs and almost burst into tears. But you know me, guys, I always find a way to sneak a few in. (The secret is to hold your iPhone behind the brochure with only the camera peaking over the top. They seriously can’t expect me to not try to take some pics at Downton Abbey. Sorry, Highclere. They are really poor quality though, so I figure that makes up for it).

The main entrance/sitting area from above

There was a sign with a picture of Hugh Bonneville on it, which I tried and failed to capture.

The house was actually a lot smaller than I expected, not really area-wise but just as individual rooms. On TV, everything looks high-ceilinged and grandiose, but in real life it sort of just looks like an extra-large house. All the decor really is as beautiful/authentic as it is in the show, except for the modern day pictures of the Carnarvon’s grandkids. Most of the furniture looked super old, and you weren’t allowed to touch or sit on any of it, which was obviously my first instinct. Also, the floor creaked an unnatural amount. As in, every single step caused an thunderous groan beneath my feet. How do the cameras not pick that sound up on the show?

Most of the bedrooms were roped off, but you were still able to peak in. It was funny because they all looked really elegant and old-fashioned, but there was like Colgate toothpaste and a Good Housekeeping magazine lying on the dresser. You would think they would try to maintain the Downton illusion a little better if they’re roping off the room, but I suppose even Downton has had to keep up with the times.

I asked about the servant areas in the show, but apparently most of those are a set! So disappointing. You do get to walk through Highclere’s servant area on the way out, though, which is now a fancy tea room.

The tour wasn’t all about Downton, though. Highclere Castle was made into a hospital for injured World War I soldiers in 1914 by Lady Almina. Pretty nice place to recover if you ask me.

After the tour was over, I felt both complete and deflated. I had just seen the filming location of one of my favorite shows! I could totally picture Maggie Smith sitting on that couch I just passed making snarky comments! I saw where the characters fake sleep! So now what? The gift shop and gardens, that’s what!

You can see sheep!

The grounds were expansive. It was so green, and everything was just blooming. There were hills and sheep in the distance. It was really peaceful, and even though it was misty out, I was perfectly happy just hanging out, taking it all in. And then it started pouring again, and I knew it was time to head home.

I was sad that my abbey adventure was coming to an end, but Dawn kept the fun going in the cab. She pulled over so that I could look at both a house with a thatched roof and a church. Dawn also told me that she has been to Arizona, Las Vegas and Monterey. She didn’t like Vegas, but I forgave her. We had a nice chat about traveling to new places and having no idea what’s going on until we arrived at the station and it was time to depart. Thanks Dawn!

Overall, I was probably a little too excited about seeing an old castle. But it’s my favorite old castle and that’s what matters. 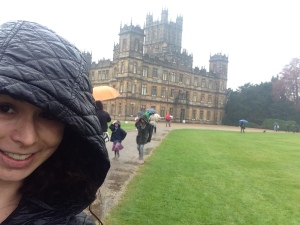 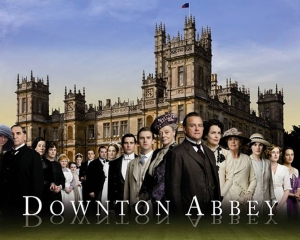 I am one of them now